India’s parliament has passed a bill that would give Indian citizenship to immigrants from three neighboring countries — but not if they are Muslim.

The controversial Citizenship Amendment Bill (CAB) will fast-track citizenship for religious minorities, including Hindus, Sikhs, Buddhists, Jains, Parsis and Christians, from Afghanistan, Bangladesh and Pakistan.
Opposition parties say the bill is unconstitutional as it bases citizenship on a person’s religion and would further marginalize India’s 200-million strong Muslim community.
The government, ruled by the Hindu nationalist Bharatiya Janata Party (BJP), said the bill seeks to protect religious minorities who fled persecution in their home countries.
It cleared the Rajya Sabha, India’s upper house of parliament where the BJP lacks a clear majority, on Wednesday with 125 votes in favor and 105 against.
The day before, lawmakers approved the bill 311-80 in the lower house of parliament — the Lok Sabha — which is dominated by Indian Prime Minister Narendra Modi’s BJP.
The bill will now be sent to the President to be signed into law.
“I think it is, without exaggeration, probably the most dangerous piece of legislation that we’ve had because it amounts to truly destroying the very character of the Indian state and the constitution,” Harsh Mander, an Indian human rights activist and author, told CNN.
Mander said the very nature of the Indian constitution is that it is based on secular values.
“Central to the idea was that your religious identity would be irrelevant to your belonging, and it’s that which is being turned on its head. It’s extremely worrying,” he said.
Modi celebrated the bill’s passing on Twitter. “A landmark day for India and our nation’s ethos of compassion and brotherhood!” he wrote. “This bill will alleviate the suffering of many who faced persecution for years.”
The bill’s passage has drawn widespread opposition and protests, especially in the northeastern states.
Many indigenous groups there fear that giving citizenship to large numbers of immigrants, who came over the porous border with Bangladesh following independence in 1971, would change the unique ethnic make-up of the region and their way of life, regardless of religion. 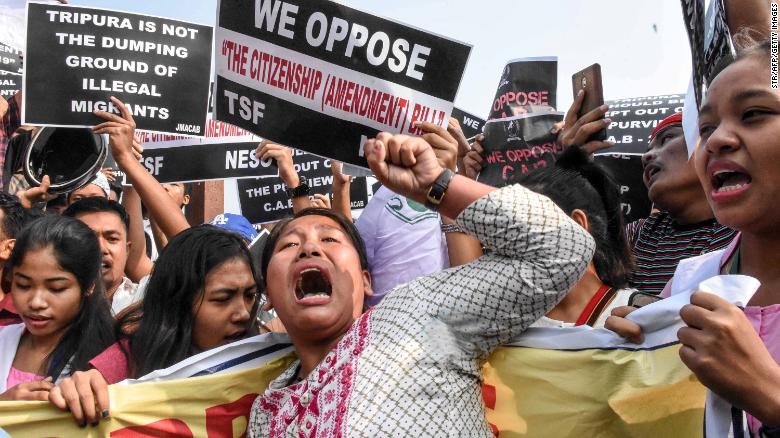 Demonstrators shout slogans as they hold placards to protest against the government’s Citizenship Amendment Bill in Agartala in India’s northeast state of Tripura.

Critics of the bill say it is another example of how Modi and his BJP party have pushed an agenda of Hindu nationalism onto secular India, a country of 1.3 billion people, at the expense of the Muslim population.
The BJP, which was re-elected in May, has its roots in India’s Hindu right-wing movement, many followers of which see India as a Hindu nation.
In August, the Indian government stripped the majority-Muslim state of Jammu and Kashmir of its autonomous status, essentially giving New Delhi more control over the region’s affairs. That same month, nearly two million people in India’s Assam were left off a controversial new National Register of Citizens, which critics feared could be used to justify religious discrimination against Muslims in the state.
And last month, India’s top court gave Hindus permission to build a temple on a disputed centuries-old holy site, which holds significance for both Hindus and Muslims. The ruling on the Ayodhya site was seen as a blow to Muslims and came at a time when Muslims increasingly see themselves as second-class citizens.

Assam was rocked by violence against the controversial Citizenship (Amendment) Bill (CAB), which was passed by the Rajya Sabha on Wednesday, as protesters hit the streets in thousands, burning tyres and wooden logs, prompting the administration to impose curfew in Guwahati and suspend mobile internet services in 10 districts of the state. The army undertook a flag march in Dibrugarh.

The CAB was earlier passed by the Lok Sabha at the stroke of midnight on Monday.

On a day when lawmakers debated the CAB in the Rajya Sabha, Assam was on the boil, with protesters raising slogans against the Central and state governments, and demanding unconditional withdrawal of the legislation. They fought pitched battles with the police, turning various parts of the stare into virtual battle grounds.

Assam Chief Minister Sarbananda Sonowal remained stuck at the Lokpriya Gopinath Bordoloi International airport here for hours after landing in the state capital from Tezpur, as his convoy could not roll out due to the massive protests.

The administration tried to tackle the situation by imposing curfew from 6-15 pm The curfew will continue till 7 am on Thursday, a senior police officer said.

Mobile internet services were suspended in 10 troubled districts – Lakhimpur, Dhemaji, Tinsukia, Dibrugarh, Charaideo, Sivasagar, Jorhat, Golaghat, Kamrup (Metro) and Kamrup districts – for 24 hours to thwart any effort to spread rumours and misinformation, while a column of army was kept on standby in Bongaigaon town.

The protests, which had started days back, intensified during the day after Union Home Minister Amit Shah tabled the legislation in the Upper House of the Parliament.

The protesters tried to march towards the state Secretariat here and threw bricks at the police and burnt tyres on the roads, creating a volatile situation. Secretariat employees also expressed solidarity with the protesters.

The protesters, including a large number of students, forcibly shut down shops and markets, and damaged a fire brigade vehicle till they were stopped by BSF, Rapid Action Force and police personnel about 500 metre from the Secretariat.

“We have used tear gas, rubber bullets, water canon, and resorted to mild lathi charge to scare them away. Some of our personnel were also injured,” said Guwahati police commissioner Dipak Kumar.

Girls joined the protests in good numbers, holding aloft placards and posters reading “no citizenship on the basis of religion”.

“This Act is unconstitutional. We Assamese indigenous people will never accept it,” said a protester.

At least 25 protesters – among them several students – sustained injuries as they fought pitched battles with the police in different parts of the state.

At least 10 companies of paramilitary forces have been deployed in the state.

Ronaldinho to marry two at once in Rio de Janeiro

Orange beards have become a ‘fashion trend’ on the streets of...

Venice Biennale 2019: Pakistani art has got representation for first...

VALUE OF WOMEN’S CONSENT IN PAKISTAN

TikTokers are the new mentors of Pakistani society as per Governor...

Fake News & Fake videos: A big risk to security and...