Sold by her family as a bride to a Chinese man, Samiya David spent only two months in China. When she returned to Pakistan, the once robust woman was nearly unrecognizable: malnourished, too weak to walk, her speech confused and disjointed.

“Don’t ask me about what happened to me there” was her only reply to her family’s questions, her cousin Pervaiz Masih said.

Within just a few weeks, she was dead.

David’s mysterious death adds to a growing body of evidence of mistreatment and abuses against Pakistani women and girls, mainly Christians, who have been trafficked to China as brides.

AP investigations have found that traffickers have increasingly targeted Pakistan’s impoverished Christian population over the past two years, paying desperate families to give their daughters and sisters, some of them teenagers, into marriage with Chinese men. Once in China, the women are often isolated, neglected, abused and sold into prostitution, frequently contacting home to plead to be brought back. Some women have told The Associated Press and activists that their husbands at times refused to feed them.

A list attained by the AP documented 629 Pakistani girls and women sold to China as brides in 2018 and up to early 2019. The list was compiled by Pakistani investigators working to break up the trafficking networks. But officials close to the investigation and activists working to rescue the women say that government officials, fearful of hurting Pakistan’s lucrative ties to Beijing, have stifled the investigations.

“These poor people have given their daughters for money, and (in China) they do whatever they want to do with them. No one is there to see what happens to the girls,” said David’s cousin, Masih. “This is the height of cruelty. We are poor people.”

David’s death, at the age of 37, shows the extremes of the cruelties trafficked women face. Other women have described being cut off without support, abused physically and mentally. Previously, the AP spoke to seven girls who were raped repeatedly when forced into prostitution. Activists say they have received reports of at least one trafficked bride killed in China but have been unable to confirm.

David now lies buried in an unmarked grave in a small Christian graveyard overgrown with weeds near her ancestral village of Mazaikewale in Pakistan’s eastern Punjab province.

Before her marriage, she lived in a cramped two-room house with her brother Saber and her widowed mother in Francisabad Colony, a congested Christian neighborhood of small cement and brick houses in a warren of narrow streets in the Punjab city of Gujranwala. Christians are among the poorest in Pakistan, a mostly Muslim nation of 220 million people.

Her brother took money from brokers to force her into marriage with a Chinese man, Masih said, though the brother denied doing so. The marriage certificate, a copy of which was obtained by the AP, was signed by a local pastor who has since fled police seeking him on suspicion of working with traffickers in multiple cases. A few months after their marriage in late 2018, David and her husband left to China. “When she left for China she was healthy. She looked good and strong,” said Masih.

Her husband was from a relatively poor, rural part of eastern Shandong province that has long struggled with lawlessness. The conservative culture in such areas strongly favors male offspring, which under China’s strict population control policies meant that a great deal of little girls were never born, hence the demand for trafficked foreign wives. Overall, China has about 34 million more men than women. 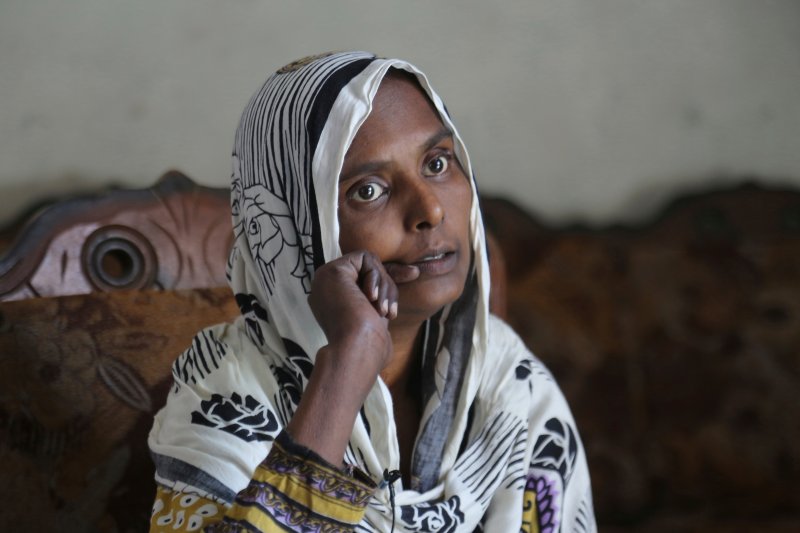 In this April 14, 2019 photo, Samiya David talks to the Associated Press, in Gujranwala, Pakistan.
After two months, her brother got a phone call telling him to pick his sister up at the airport in Lahore. He found David in a wheelchair, too weak to walk.

The AP met David in late April. Living again in the house in Francisabad Colony, she showed her wedding photos, taken six months earlier. In one, she was dressed in a white gown, smiling, looking robust, with long, flowing black hair.

David barely resembled the woman in the picture. Her cheeks were sunken, complexion sallow, her tiny frame emaciated and frail. She seemed confused, her speech incoherent. When asked about her wedding or time in China, she lost focus — her words wandering — and at one point suddenly stood to make tea, mumbling about the sugar. She paced, repeating, “I am ok. I am ok.” When asked why she looked so different in the wedding photos, she stared vacantly into space, finally saying, “There is nothing wrong with me.”

“She has the evil eye,” said her brother, who was present at the interview. She died a few days later, on May 1.

Dr. Meet Khan Tareen treated David on her one visit to his clinic in Lahore.

“She was very malnourished and very weak,” with anemia and jaundice, he said in an interview. Preliminary tests suggested several possible ailments, including organ failure, and he said he told her brother she needed to be hospitalized. “She was so malnourished . . . a very, very, very low weight,” he said.

Her death certificate listed cause of death as “natural.” Her brother has refused to talk to the police about his sister. When contacted by the AP in November, he said there was no autopsy and that he had lost her marriage documents, copies of her husband’s passport and the pictures David had showed the AP.

David’s cousin said the family is hiding the truth because they sold her as a bride. “They have taken money. That is why they are hiding everything,” said Masih, who is a member of the town’s Union Council, which registers marriages and deaths.

Breaking a family’s silence is difficult, said a senior government official familiar with the investigations into the sale of brides.

“They might sell their daughters, and even if they discover that the marriage was bad or she is suffering, they would rather ignore it than lose face in front of friends and family,” he said on condition of anonymity because he is not authorized to speak to the media.

The trafficking networks are operated by Pakistani and Chinese brokers who cruise Christian areas willing to sell daughters and sisters. They are known to pay off pastors, particularly at small, evangelical churches, to encourage their flock to do so.

Christian activist Salim Iqbal, who was among the first to sound the alarm last November about bride trafficking, is in touch with a number of Pakistani women in China via groups on the messaging app We Chat. He said one girl recently told him her husband doesn’t give her food or medicine.

Another woman, Samia Yousaf, who was 24 when she was forced into marriage, told the AP of the abuses she suffered in China. 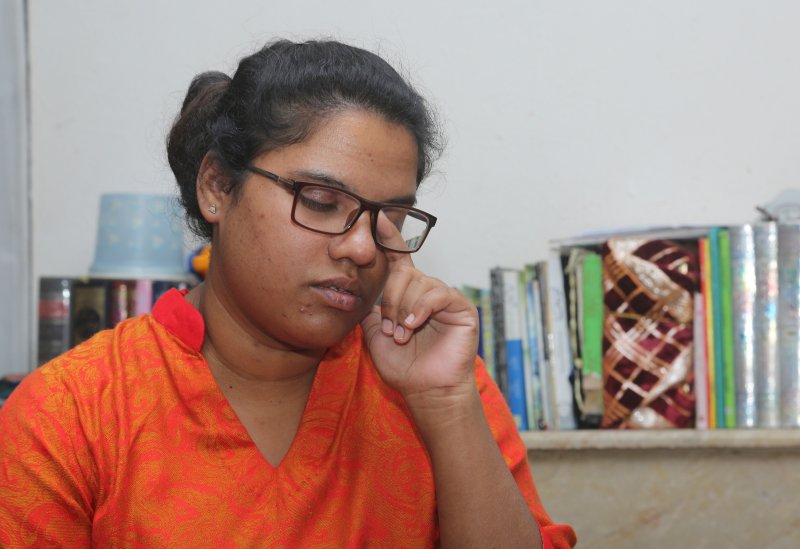 In this Nov. 12, 2019 photo, Samia Yousaf wipes tears while narrates her ordeal, in Lahore, Pakistan.
She and her husband went there after she became pregnant. When she arrived, nothing was as her husband had promised. He wasn’t well off. They lived in one room on the edge of a field, infested with spiders.She gave birth by cesarean section. Her husband’s sister refused to let her hold her son after the birth and controlled when and for how long she could see the child during her six days in the hospital. “I started screaming at her one time when she took my baby,” Yousaf recalled.

Her husband refused to let her breastfeed her son until doctors implored him to allow her to, she said. Unable to walk without assistance, the doctors asked her husband to take her for a walk and he repeatedly let her fall, refusing to help her back up.

After she left the hospital, abuses continued. Her husband denied her food. “He was cruel. I thought he wanted to kill me,” she said.

Three weeks later, authorities threatened her with jail because her visa had expired. Her husband had kept her passport. Frightened and unwell, she pleaded with him to let her and her son go home to Pakistan.

But he refused to let her take the baby. She discovered her name was not on her son’s registration, only her husband’s. The last time she saw her son was in September 2017, just before her return.

“Every day I think of my baby,” said Yousaf, who works as a nanny in Lahore. “I wonder what he looks like. My heart is always sad.”

17 die and several of the injured critical as small plane...

The MacCoin: The Currency of Food.