The son of a powerful Emirate has been laid to rest in the UAE after he was found dead in his London penthouse apartment at the age of 39 on Monday.

Tens of thousands of mourners attended the funeral of Sheikh Khalid bin Sultan Al Qasimi, the owner of fashion label Qasimi Homme, on Wednesday in the city of Sharjah, which his father rules over.

Sheikh Dr Sultan bin Muhammad Al Qasimi stood over his son’s body with his eyes closed as he joined in prayers at the King Faisal Mosque at 9am.

The streets around King Faisal mosque was blocked off by police on Wednesday as the ceremony took place, with regular traffic directed around.

Mourners filed into the building in silence before dignitaries including the Sultan entered through a separate door.

Mourners sat in silence until shortly before 9am when they stood as prayers were read out, Gulf News reported.

The bier carrying Sheikh Khalid’s body was then driven to the nearby Al Jubail Cemetery where it was buried in an unmarked grave, decorated with only a few stones. 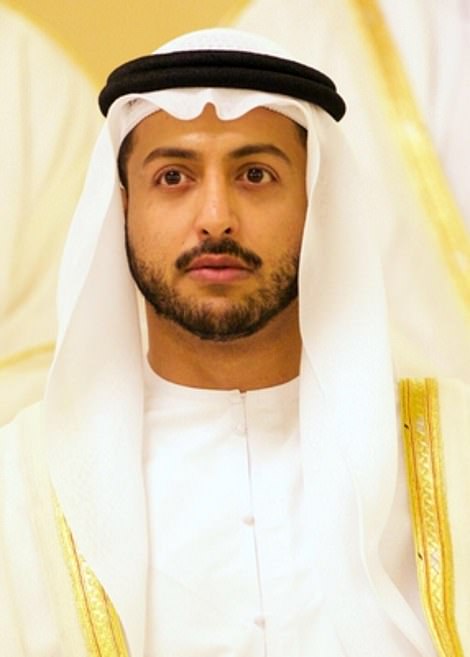 As the Emirates left the graveyard, other mourners filed in to pay their respects. Three days of national mourning began across the UAE on Tuesday, with flags flying at half mast.  Al Badee Palace in Sharjah has also been opened to receive mourners during this period.

According to Sharia law, the dead should be buried as soon as possible, usually within 24 hours of death. The body is washed and shrouded before burial, which is followed by a salah, or prayer.

The high-end apartment block where his body was found boasts a dozen homes that sell for up to £90 million.

The Sheikh’s friend and former business partner Elliott Frieze said last night: ‘He was incredibly hard working and talented. He was a wonderful person.’

Flags in Sharjah have been ordered to fly at half mast as three days of national mourning begin.

Tributes have flooded in on social media expressing condolences to the Emir, who lost another son aged 24 in 1999.

His death has been described as ‘unexpected’ by members of his team.

The prince was born in Sharjah but moved to the UK aged nine where he was educated at the prestigious Tonbridge School in Kent.

He studied French and Spanish at Imperial College London before moving on to an architectural degree and art school Central Saint Martins, where he studied fashion and launched his menswear label Qasimi Homme in 2008.

Its flagship UK store opened in Soho that year, with his clothes now stocked across the globe and paraded at fashion weeks in London, Paris and the Middle East.

The UAE’s Ministry of Presidential Affairs said in a statement: ‘President His Highness Sheikh Khalifa Bin Zayed Al Nahyan mourns with grief and sorrow, the death of Sheikh Khalid Bin Sultan Bin Mohammed Al Qasimi, the son of the Ruler of Sharjah, praying to Allah the Almighty to rest his soul in peace, and grant his family patience and solace.’

A tribute posted on his brand’s Instagram account on Tuesday reads: ‘It is with great sadness that we report that Khalid Al Qasimi has unexpectedly passed away on 1st July 2019.

‘Khalid was praised for his tenacious yet sensitive exploration of social-political issues, particularly those pertaining to the Middle East and its sometimes strained relationship with the West, a subject very close to his heart and his upbringing.

‘His goal was to create a world full of beautifully crafted products infused with cultural, social and political undertones to inform and inspire.

‘The design world has lost a great philosopher and artist, and we ask that the privacy of the family, team and brand are respected at this difficult time.’

Sheikh Sultan bin Muhammad Al Qasimi came into power in 1972. This is the second of his children to die.

May Allah hold you and your family at this painful moment and give you comfort as you mourn the untimely death of your beloved son.

Alleged spy pigeon released after no evidence found against allegations.

7 DIN MOHABBAT IN: ONE OF THE WORST FILMS EVER MADE IN THE HISTORY...

Heart Disease and High Cholesterol. The WHO Just Declared War on Trans Fats

Alleged spy pigeon released after no evidence found against allegations.

Be Comfortable Under Your Own Skin: A lesson to learn from...

The best looks from the 2019 Billboard Music Awards red carpet