When the typically unflappable Chris Woakes is putting his finger to his lips and shushing a spectator in celebration, you know something is slightly amiss. In the 21st over of Pakistan’s innings, after a wonderful diving catch at long-off to remove Imam-ul-Haq, here was Woakes channelling his inner Portuguese football manager in response to apparent heckling from the stands.

It did not stop there either; among the huddle of England players that swarmed him Ben Stokes and Jason Roy could be seen offering sarcastic applause in the same direction. Umpires Marais Erasmus and Sundaram Ravi were clearly unimpressed, moving in to settle things down with a word or two. 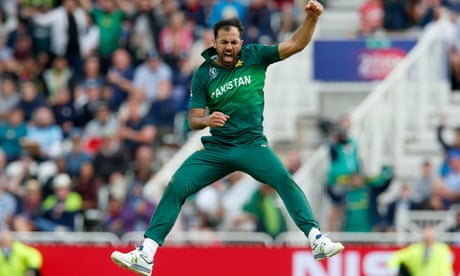 The exact nature of what prompted all this was unclear in the immediate aftermath but it still felt strange from a team led by Eoin Morgan. And especially so since the captain had reminded his troops before the World Cup that, despite being hosts, crowds will have the potential to produce an away day feel (and not least against Pakistan, Bangladesh or India).

Though a minor incident it was symptomatic of a performance in the field that was ill-disciplined and profligate. Sarfaraz Ahmed’s side were always liable to flick the switch marked “mercurial” after Friday’s meltdown against West Indies – and their supporters tend to be noisy come rain or shine – but England were still taken aback.

Fielding stats are logged by CricViz these days and after a strong showing against South Africa that was rated to be worth 35 runs, a score of plus-20 for England appeared OK. But this owed much to Woakes in particular.

The harder the chance, the greater the weight it carries – and at least two of the English ODI-record four he held might have been up for catch of the tournament had Stokes not sewn that up last week

Roy will not look back on this match with much fondness. After a half-century and some Lev Yashin impersonations at backward point last week, here he fell seventh ball to Shadab Khan’s leg-breaks and fluffed two chances in the field.

His drop off Mohammad Hafeez on 14 in the 25th over was as regulation as they come at long-off, and had he not fumbled the ball 10 overs later, Hafeez might have been run out on 50 too, given both he and his partner, Sarfaraz, found themselves at the same end. With the man they call The Professor chalking up a top score of 84, these mistakes were costly.

The Surrey man was not alone, with around 17 runs also gifted by sloppy ground work. Morgan chastised himself in the opening over when he let a four through his grasp and in the 14th threw to the wrong end for a run-out attempt. Joe Root saw four overthrows result from a similar shy late on while James Vince, on as a sub, was nutmegged by a Sarfaraz pull shot to the delight of the supporters in green. 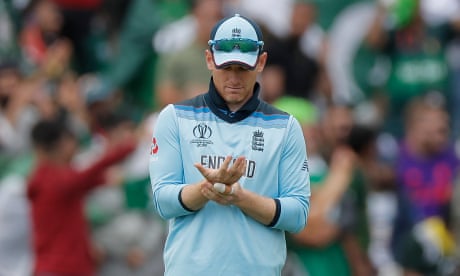 With 11 wides also sent down – Jofra Archer grew visibly agitated by some of the calls from the square-leg umpire amid 10 overs that leaked 79 runs – England’s target was significantly greater than they might have otherwise expected. Wrapping up the innings 19 minutes late meant the over-rate was flirting with possible sanctions too.

It was not all doom and gloom. As well as the hands of Woakes proving so adhesive, Jonny Bairstow typically excelled on the boundary rope. Jos Buttler also picked up a sharp stumping, having drilled hard with coach Bruce French over the past few days in response to some problems against South Africa and in last month’s ODIs.

Moeen Ali was the beneficiary of this amid a fine return of three for 50 that offset Pakistan taking a particular fancy to Adil Rashid. England possibly overdid the short-ball tactic, sending down 88 bumpers that produced two wickets for 102, but Mark Wood was excellent on his return to the side, showing good pace in his two for 53.

But ultimately, with the margin of defeat a mere 14 runs, England will head to Cardiff for Saturday’s meeting with Bangladesh – and their similarly vocal supporters – harbouring a sense of regret. As Morgan keeps stressing, there remains much work to do.

Sarfraz Ahmed silences critics over Fawad Alam controversy. “We can not...