Two-time World Cup champion and one of India’s greatest-ever limited-overs batsman, Yuvraj Singh has called time on an illustrious 19-year career, the batsman confirmed in a press conference in Mumbai on Monday (June 10).

“I have been playing international cricket on and off for 17 years. Now, it is time to say goodbye, to move on and walk away. It has been a roller coaster ride and a great story but it has to come to an end,” said an emotional Yuvraj. “This is the best time to move on.”
The 37-year-old finishes with a total of 402 international caps to his name with his role in One-Day Internationals for India definitely being the standout. One of the cleanest hitters of the ball the game has seen, Yuvraj played 40 Tests, 304 ODIs and 58 Twenty20 Internationals.

He started his career back in 2000 as an 18-year-old and showed glimpses of his abilities in just the second ODI when he shredded an Australian bowling attack to pieces in the 2000 Champions Trophy in Kenya. He soon became a lynchpin of the Indian middle-order often taking his side to memorable wins like in the famous Natwest Trophy final in 2003, which in some ways changed the landscape of Indian cricket.

He could not have as long a Test career as he would have wanted but still managed 1,900 runs at an average of 33.92 which included 11 half-centuries and three tons. Yuvraj last played a Test back in 2012. But in the shorter formats of the game, he was indispensable.

Yuvraj still holds the record for the fastest fifty in a T20I, a feat he managed off 12 balls in the 2007 T20 World Cup against England. This was the same match where he slammed Stuart Broad for six sixes in an over. His 30-ball 70 in the semi-final against Australia was instrumental in helping India reach the final and eventually lift the inaugural World T20 title. 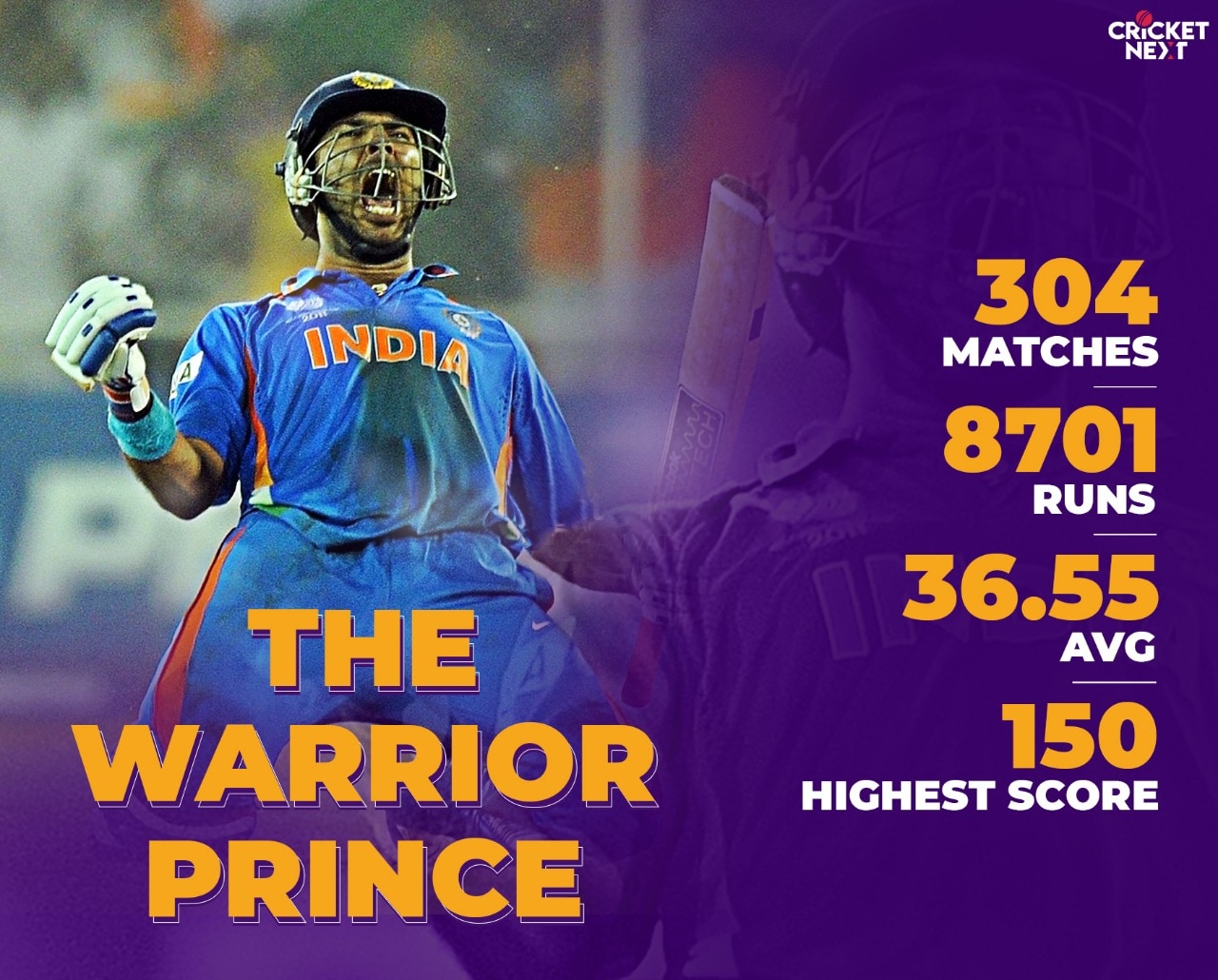 Yuvraj’s biggest and most important contribution though came at the 2011 50-over World Cup when India lifted the title for the first time in 28 years. Despite not being a 100 per cent, the southpaw was India’s cornerstone all through the tournament both with the bat and ball and was named Player of the tournament for his efforts.

He stroked 362 runs in the campaign in nine games at an average of 90.50 which included four fifties and a century. He also returned 15 wickets with the ball at 25.13.

But soon after the World Cup came the biggest turning point in Yuvraj’s life when he was diagnosed with cancer and required a two-and-a-half month treatment in the USA. Despite the long and arduous sessions, he returned to competitive cricket and was named in India’s squad for the World T20 in Sri Lanka in 2012.

With the scores still not coming, Yuvraj soon found his stocks dwindling and he last played an international for India in 2017. Yuvraj would still have harboured hopes of making a comeback after being picked up by Mumbai Indians in the 2019 IPL auctions but he could only feature in four games, where he couldn’t make a lasting impact.

The all-rounder reportedly is now thinking about pursuing a freelance career in foreign T20 leagues and has a few offers up his sleeve.

Sarfraz Ahmed silences critics over Fawad Alam controversy. “We can not...

Something so unexpected happened when 100,000 cubic meter of debris was...

Advertising Agencies laying off their staff from Islamabad offices

Hum Style Awards, who wore what?

She Rejected a 'Rishta' Because the boy did not like her...