Fatima Ali’s family has opened up about the Top Chef contestant’s tragic passing.

In a lengthy Instagram post shared to Ali’s account late Friday evening, her family described their final hours with her, the lessons they’ve learned throughout this difficult experience, and thanked her fans for their support and love during this trying time.

Fatima Ali was born on Aug. 8, 1989, in Lahore, Pakistan. Mr. Ali said his sister would watch culinary reality shows on television as a child and dream of becoming a chef.

She moved to the United States when she was 18 to attend culinary school. When she graduated from the Culinary Institute of America in Hyde Park, N.Y., in 2011, Ms. Ali said, her mother wanted her to return home. But she sought to stay a year in New York to work in the culinary field.

Before appearing on “Top Chef,” Ms. Ali became the first Pakistani woman to win on another cooking reality show, “Chopped.” But Mr. Ali said his sister’s desire to be a chef on television was not just because she wanted to be famous.

“Pakistan gets a bad rap when it comes up in the media,” he said. “It’s about terrorism, violence or upheaval. Fatima wanted everyday people to associate Pakistan with other things and change the narrative.”

Joe Flamm, 32, who won the season of “Top Chef” that Ms. Ali appeared on, recalled eating a dish of oxtail biryani that she prepared for show contestants.

Ms. Ali during Season 15 of “Top Chef” in 2017.CreditPaul Trantow/Bravo, via Associated Press 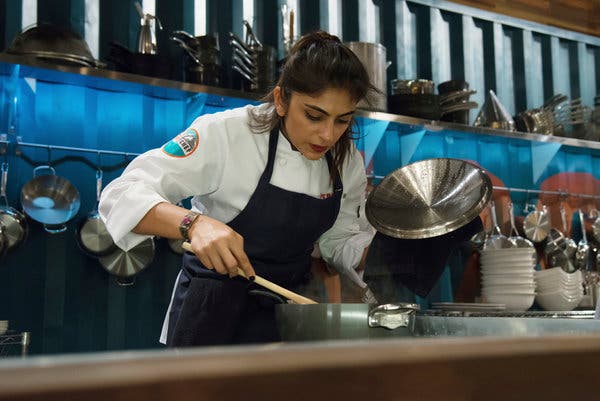 The braised oxtails were immaculately tender, simmered to the point that the boiled eggs and chickpeas sponged up the flavor from the meat, making the chickpeas rich and creamy, he said on Saturday. It was served over delicately fluffy jasmine rice.

“It was one of those dishes that told you everything you needed to know about a person,” said Mr. Flamm, the executive chef of Cafe Spiaggia in Chicago. “It was so soulful but also technically perfect. It was her.”

The chef was first diagnosed with Ewing’s Sarcoma, a rare form of bone cancer, in 2017. She had undergone surgery to remove a tumor in her shoulder bone and had told PEOPLE she was “technically cancer-free” at the Food & Wine Classic in Aspen last July.

But in October, through an emotional essay for Bon Appetit, Ali revealed that her cancer was back “with a vengeance.” She died early Friday morningat age 29.

“Fatima was at home with us, surrounded by her loved ones and beloved cat Mr. Meow, when she left us in the early hours of the morning,” the family began, which featured a collage of photos through Ali’s life alongside the post.

“When someone as bright and young and vivacious as our Fati passes, the only metaphor that seems to fit is that of a star — a beacon in the darkness, a light that guides us, on which to make wishes, from which to weave dreams,” they wrote, affectionately referring to Ali by her nickname “Fati.”

“For all the comfort and beauty they offer us, stars, too, are impermanent. This morning a great one was snuffed out,” they continued.

From there, the family touched upon what they’ve learned from the former Top Chef contestant, noting that her “spirit will continue to steer us” and encouraged her followers to also embrace her life lessons.

“Live your life as she did — to the fullest. Pursue your passion; spread love and joy; be kind and forgiving; be generous; enjoy every morsel — from humble street food to decadent fine dining; cook for the people you love,” they wrote. “Travel the world and seek out adventure. Help others and don’t be afraid to take the road less taken.”

“Fatima will always be a part of us, and in fact, if you look deep enough, you may find your own inner Fati. If you’re lucky enough to find her there, trust her, listen to her, because she will change your life for the better.”

“We’ve learned a great deal over the course of her illness, not only pragmatic lessons we wish we hadn’t needed to learn about her disease and our health system, but about the immense love of which people are capable; about the power of being true to yourself; about how we can be better if we model ourselves after someone like her,” they added.

Finishing the post, her family thanked her supporters from “the bottom of our now broken hearts” and touched upon the “humbling experience.”

“We’re eternally grateful for the unending support, love, and generosity shown by people along the way — from random strangers we passed on the street who would tell her how much they admire and respect her; to all her doctors and nurses who did their best; the chefs and hospitality friends who are now part of our extended family; and the big wigs that reached out to see how they can make her dreams a reality,” they said.

“This has been a truly humbling experience for us all and even in her last chapter as she began to leave us, Fatima showed us how we should live,” the family finished.

Earlier today, many former contestants from season 15 of the competition show posted on Instagram with photos and memories of their time with the chef.

Bruce Kalman shared a post on Instagram, writing: “It’s with a heavy heart we say goodbye to Fatima Ali today, as she has lost her battle with cancer. I will miss you Fati, and you will be in my heart forever. I’ll always remember the great times we had, especially our interview during the tailgating episode discussing football, stadiums, and Taylor Swift. Much love, Bruce.”

Chef Brother Luck posted a photo of him and Ali embracing, saying he was “at loss right now of how much this sucks but grateful she’s no longer in pain.”

“God is gaining another angel today and heaven will be full of laughter upon her arrival,” he continued. “She was a queen who carried a heart of gold and my prayers go out to her family. I’m so grateful for the time spent with her and memories we shared. Please cherish the time you have with someone because tomorrow isn’t promised for anyone.”

“My dearest Fatima, this is how I will remember you til my time on earth is done. I will remember the hours on end we spent in the kid pool (the damn scratches) or the hot tub playing Never Have I Ever,” chef Claudette Zepeda-Wilkins wrote. “Hearing you talk about your mom with so much love and wishing my kids would speak the same of me one day. Falling asleep talking about life/boys/ dreams. Sweet dreams our Pakistaní princess, the pain is over.”

Fellow Top Chef contestant Chef Tu David Phu wrote: “I’m struggling to accept your passing. You had so much more to offer. However, there’s one thing I know for sure #god now has another #angel. You are truly an #inspiration. Your strength has taught me so much.”

Late Friday, Top Chef host Padma Lakshmi also paid tribute to her friend in an emotional Instagram video, which featured several photographs of the pair together, as well as a few solo shots of Ali.

Along with a sentimental message and some words borrowed from Ali, the clip played to the tune of Carole King’s “So Far Away.”

“Goodbye lil’ sis,” wrote Lakshmi, 48. “One of our brightest stars has fallen from the sky…. I have no words, but here are some of hers: ‘I dream of being better. I dream of being myself again, but I know I’ll never quite be the same, and that’s okay. I know I’ll be different, and, despite the worry that settles into me every time I wake up, I look forward to meeting that woman one day.’ #teamfati”

Shortly after her death, a representative for Bravo confirmed her passing to PEOPLE:

“We are deeply saddened to share the news that Fatima Ali has lost her courageous battle with cancer. Our thoughts are with her family and friends at this time.”

Steven Spielberg Is First Director to Cross $10 Billion at the...

BREAKING: Johnson & Johnson knew for decades about ‘asbestos’ in baby...

Review Of Teefa In Trouble from Dubai: ‘All That Glitters Is...