Black Shark is a new Chinese company which managed to get under the spotlight because of Xiaomi’s investment. Xiaomi, one of the largest tech companies in China, invested an undisclosed amount of money into Black Shark, or in other words, in Black Shark’s gaming smartphone, which the company just announced in China. Black Shark is also aiming to release some accessories and e-sports smartphones in the future, and we’re guessing that most of their products in the coming months will be focused on the newly-announced handset. Having said that, the Black Shark gaming smartphone is more or less exactly what we’ve expected in terms of the design, as the phone leaked a number of times before it was announced. This device is meant to be a direct competitor to Nubia’s upcoming gaming handset, the Red Devil, which will be announced on April 19. That being said, let’s see what the Black Shark has to offer, shall we, starting with the phone’s spec sheet.

The Black Shark Gaming handset is fueled by the Snapdragon 845 64-bit octa-core processor by Qualcomm, and in this case, that SoC is clocked at 2.8GHz. The Adreno 630 GPU is included on the SoC itself, as per usual, and in addition to this chip, Black Shark has included either 6GB or 8GB of RAM on the phone, depending on which variant you opt to get. Keep in mind that this is LPDDR4X RAM we’re looking at, in both cases, while UFS 2.1 flash storage is included. The 6GB RAM variant comes with 64GB of native storage, while the 8GB RAM model includes 128GB of internal storage. The phone’s display measures 5.99 inches, and this is a fullHD+ (2160 x 1080, 403PPI) panel. A 4,000mAh non-removable battery is included in this phone as well, it is not removable, and it supports Qualcomm’s Quick Charge 3.0 fast charging.

There are two cameras included on the back of the Black Shark gaming smartphone, 12-megapixel (1.25um pixel size, PDAF) and 20-megapixel (1.0um pixel size, PDAF) shooters. Both of those cameras feature an f/1.75 aperture, and in both cases, we’re looking at 6P lenses. A dual-LED, dual-tone flash is included on the back of the device as well, and the company says that the phone’s cameras sport something called “Dark Light Enhancement Technology”. A 20-megapixel snapper (1.0um pixel size, f/2.2 aperture) is included on the phone’s front side, and this is a 5P lens. This smartphone also includes what the company calls “a professional microphone”, while dual speakers are also a part of the package. There are two SIM card slots included in the Black Shark gaming smartphone, two nano SIM card slots, while the phone supports the following LTE bands: FDD-LTE – band B1/B3/B4/B5/B7/B8/B12 ; TD-LTE – B34/B38/B39/B40/B41. The device features a front-facing fingerprint scanner, while it measures 161.6 x 75.4 x 9.35mm, and weighs 190 grams. 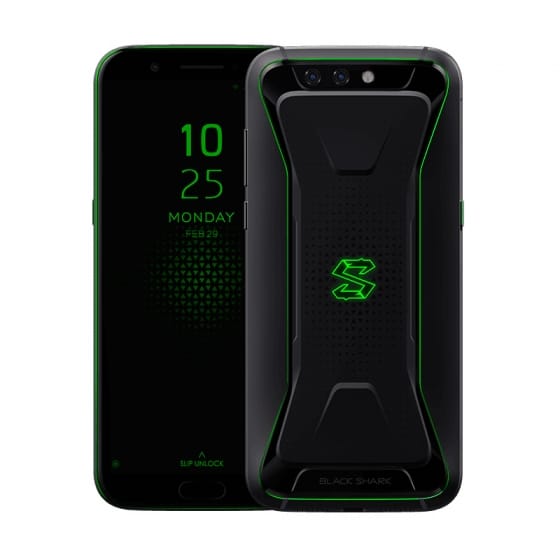 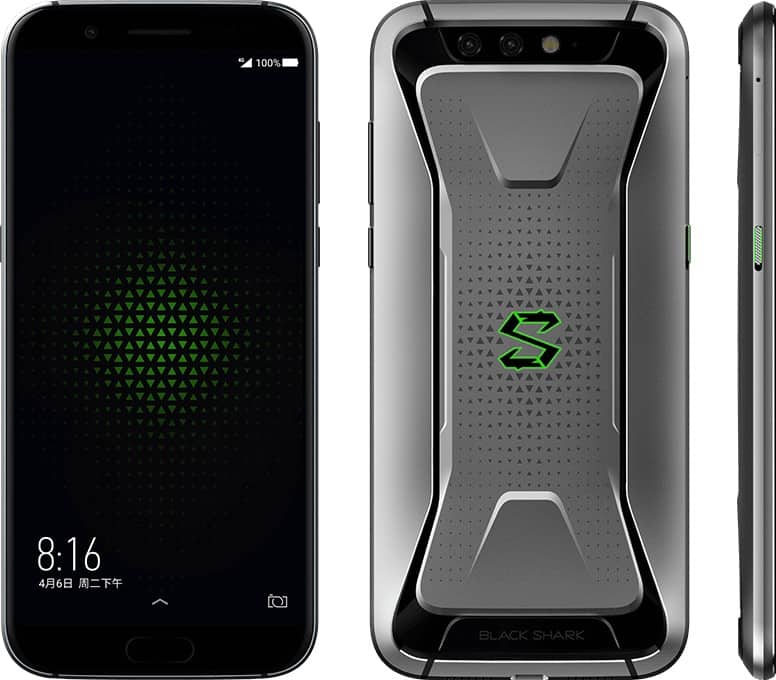 This handset comes with three cameras overall, two are included on its back, while a single camera sits on the phone’s front side. 12 and 20-megapixel snappers sit on the back of the Black Shark gaming handset, while a single 20-megapixel one is included on the front. Both of its rear-facing snappers feature a large f/1.75 aperture, the 12-megapixel one has 1.25um-size pixels, while the other one comes with regular 1.0um pixels. Both of those cameras have 6P (6-piece) lenses, and PDAF is available on both of them as well. Black Shark has also included something called ‘Dark Light Enhancement Technology’ into the software, while an HDR, Panorama, and Portrait modes are all available here as well. A 20-megapixel front-facer sports an f/2.2 aperture, 1.0um pixel size, and a 5-piece (5P) lens. This camera is capable of shooting 4K video at 30fps, while it comes with ‘Smart Beauty’ feature which will enhance your selfies. There are a number of other shooting modes included in the camera app overall, in case you were wondering.

A 4,000mAh non-removable battery is included in the Black Shark gaming handset, and it supports Qualcomm’s Quick Charge 3.0 technology. In order to replenish that battery, you will need to use the phone’s Type-C USB port, which is located on the bottom of the device, as the phone does not include wireless charging, as expected. That being said, Black Shark really did not talk much about the device’s battery, and the company’s official spec sheet only lists the basics. In theory, this is a rather large battery pack, especially considering that the phone sports a 5.99-inch fullHD+ display, and that it comes with a power efficient Snapdragon 845 64-bit octa-core SoC. It is possible that Black Shark did not list any battery life projections due to the fact this is a gaming smartphone, and its battery life will vary quite a bit, depending on how much you opt to use it for gaming, and what sort of games do you plan to play on it. Graphics-intensive 3D games usually drain the battery much quicker than non-intensive ones, but in theory, this battery should be good enough for gaming sessions, only time will tell how good.

The Black Shark gaming handset comes with Android 8.1 Oreo, and that is basically all the info that is available at the moment. The device does come with some sort of a skin on top of Android, but it seems like we’re not looking at Xiaomi’s MIUI skin, as some sources suggested prior to the phone’s announcement. As you are getting Android 8.1 Oreo here, regular Oreo features should be included, such as Notifications Dots, Picture-in-Picture mode, and so on, but we cannot know for sure as we’re not sure what skin exactly runs on top of stock Android here. That being said, the phone’s software does include a special performance mode, which can be activated via the ‘SHARK’ key on the side, which we’ve talked about earlier.

As far as security is concerned, this smartphone does sport a fingerprint scanner below its display, but facial recognition technology was not mentioned by the company, so well assume that it does not offer anything of the sort. The device’s fingerprint scanner actually lets you access the phone’s silent mode, DND and other options while gaming, while it functions as a regular fingerprint scanner / home key when you’re not gaming. That being said, you still have all the regular security methods included on the device, such as PIN lock and pattern lock, for example. Black Shark did not mention any additional security features either, but if anything pops up we’ll make sure to update the article.

As already mentioned, Black Shark introduced two variants of its gaming handset, one variant comes with 6GB of RAM and 64GB of native storage, while the other one includes 8GB of RAM and 128GB of internal storage. The 6GB RAM model is priced at 2,999 Yuan ($477) in China, while the 8GB RAM variant costs 3,499 Yuan ($557). The Black Shark gaming handset is already available for pre-order in China, and it will go on sale on April 20. The phone is available from Black Shark directly, from Xiaomi, and via JingDong Mall (JD.com). This phone’s availability outside of China was not mentioned at all, so it remains to be seen if it will launch outside of Black Shark’s homeland at all. 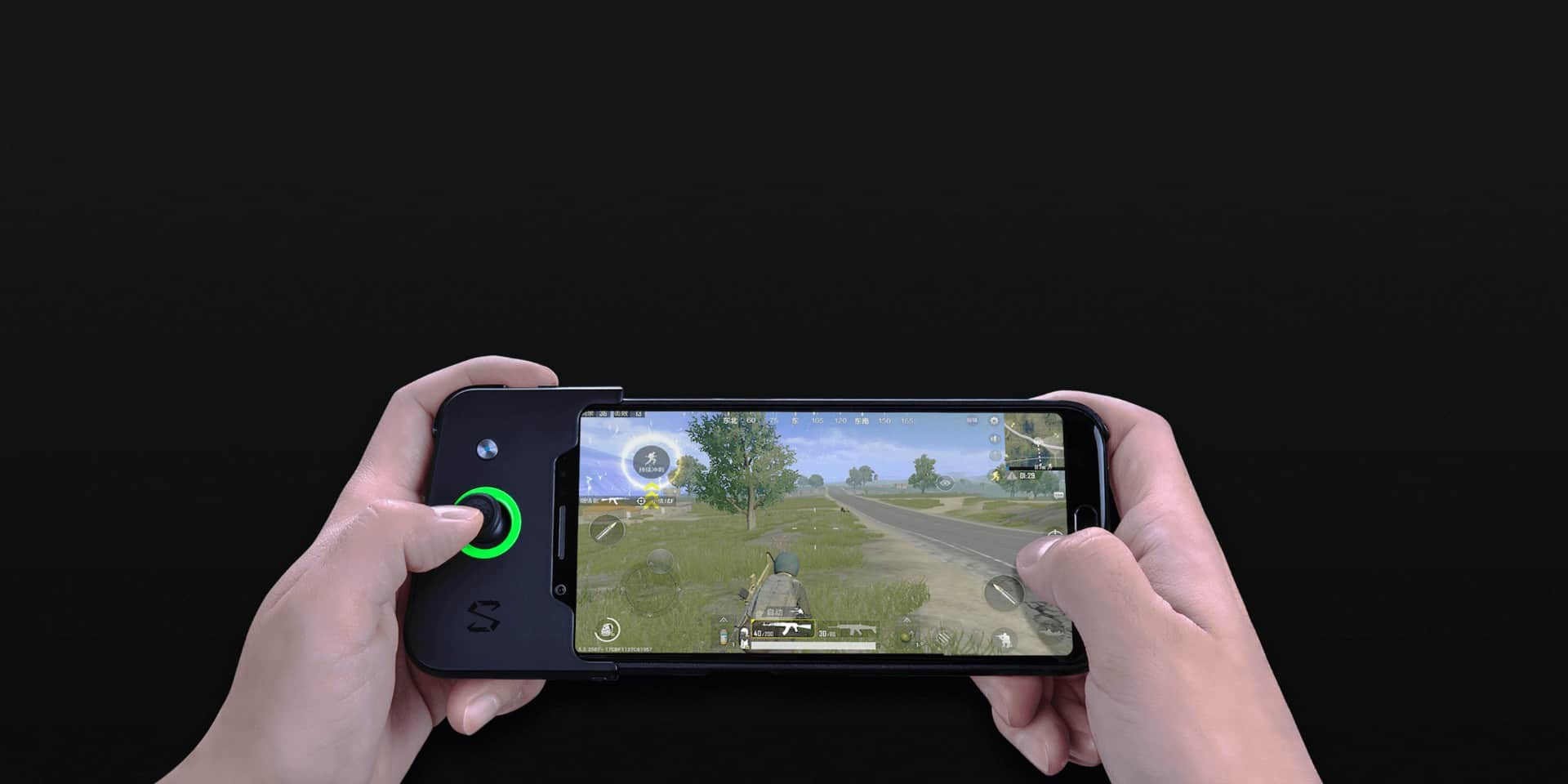 In addition to announcing the phone itself, Black Shark has also introduced its very first accessory for the device, the Black Shark Gamepad. This gadget attached to the bottom side of the phone, and it adds an analog stick to the experience, plus some buttons. This gamepad has a ‘H66’ model number, and it utilizes Bluetooth 4.0 in order to connect to the device. This gamepad packs in a 150mAh non-removable battery, and the company says that you can use it for gaming for about 3.5 hours before you’ll need to charge it, while it can sit on standby for about 30 hours.

Say No to ‘handshake’, refuse ‘peck on the cheek’ and avoid ‘hugging’: Coronavirus changes global habits

Could capping Anchors’ salaries to 10 Lac per month save hundreds of media worker’s jobs?

Samsung Glaxy S10 Launch: What we like and what we don’t...