Pakistani fast bowler Junaid Khan on Monday has taken a dig at Pakistan Cricket Board (PCB) after his exclusion from World Cup squad. PCB, selected Wahab Riaz ahead of Junaid in the World Cup squad.

Wahab has not played a single ODI since June 4, 2017, which was a group match against arch-rivals India during Champions Trophy held in England.

The selection of Riaz has raised eyebrows as he hasn’t played international cricket in almost two years. On the other hand, Junaid was considered to spearhead the Pakistan bowling attack on English pitches. 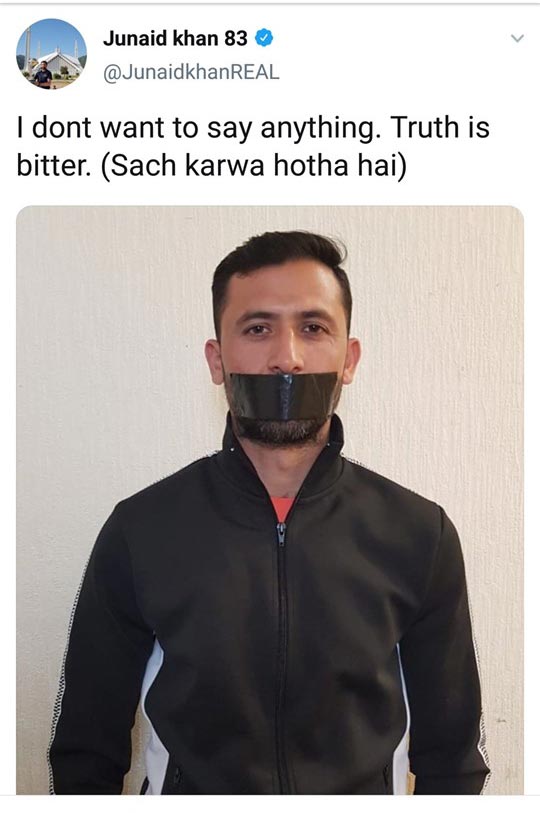 Junaid posted the picture on the social media, writing: “I don’t want to say anything. Truth is bitter.” Pakistan Chief Selector Inzamam-ul-Haq on Monday announced changes to the squad for the World Cup, inducting Mohammad Amir and Wahab Riaz in place of Faheem Ashraf and Junaid.

“Junaid and Faheem are dropped but that doesn’t mean they are not good. But we think players like Amir and Wahab are more suitable for these conditions, which is why we have preferred them,” said Inzamam.

Junaid played twice in the five-match series against England which Pakistan lost 0-4. He bowled 18 overs and got two wickets for 142 runs. Interestingly, 19-year-old Mohammad Hasnain was retained in the squad although he had similar fortunes in the series.

Wahab, who has not played an ODI in two years, had been criticised by coach Mickey Arthur sometime back for “not winning the team any matches in years”. In his last match, against India in the first match of 2017 Champions Trophy, he gave away 87 runs in 8.4 overs, failing to take a wicket.

Amir took only two wickets in the last 10 ODIs he played, remaining wicket-less in as many as seven matches. He was part of the team in the first ODI against England, which was washed out. He missed the rest of the series because of an illness.

Junaid has 13 wickets from his last 10 ODIs, including a three-wicket haul against Australia and a four-wicket performance against Bangladesh in the UAE. In his 76 ODIs, he has taken 110 wickets.

#PSL2020 OPENING CEREMONY – THE WORST OF THE WORST: Here is how social media reacted

15 Muslim MPs from Pakistan origin, elected to House of Commons...

#DigitalPakistan can be a game changer for Pakistan’s economy! Only 18...

STEVEN Spielberg’s daughter Mikaela has launched a new career as a...

Nawaz Sharif, Maryam and Safdar acquitted in the Avenfield case