Asked in an interview with Bloomberg about calls in China to boycott Apple (AAPL), Ren said he would be opposed to any such retaliatory action from Beijing even as tensions with the United States escalate.
“That will not happen first of all, and second of all if that happens, I’ll be the first to protest,” Ren told Bloomberg.
“Apple is the world’s leading company. If there was no Apple, there would be no mobile internet,” Ren said. “Apple is my teacher, it’s advancing in front of us, as a student why should I oppose my teacher?” he added.
The comments come as Ren’s company is in crisis mode. 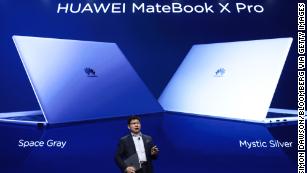 Microsoft pulls Huawei laptops from its online store
The US Department of Commerce placed Huawei on a trade blacklist earlier this month, effectively barring it from conducting business with American companies.
The ban forced suppliers like Google (GOOGL) and ARM Holdings to cut off ties with the Chinese company. Top carriers in the UK and Japan are also delaying the launch of Huawei smartphones.
The US restrictions threaten Huawei’s position as the world’s largest telecommunications equipment maker and No. 2 smartphone brand.
Washington’s ban on the Chinese company “could stir up the smartphone industry by pausing Huawei’s positive momentum,” analysts at Fitch Ratings wrote in a note on Sunday. The ban could also benefit industry leader Samsung as consumers around the world look for alternatives to Huawei smartphones, they added.
What did Huawei do to land in such hot water with the US?
Huawei and Apple have had vastly different fortunes in Huawei’s home market of China.
Huawei shipped nearly 30 million phones in China in the quarter ended March, up 41% compared to the same period last year, according to research firm Canalys.
Meanwhile, Apple saw its iPhone sales in China drop 30% in the same period. The country remains a key market for Apple. Greater China, which includes Taiwan and Hong Kong, accounted for nearly 18% of net sales in the quarter ended March.
During an earnings call last month, Apple CEO Tim Cook said iPhone sales in China should be boosted by “improved trade dialogue” between Beijing and Washington and “very positive customer response to the pricing actions we’ve taken in that market.” 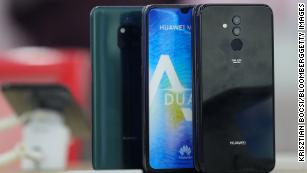 Huawei could be the first big casualty of China’s clash with America
But since then, trade talks between Washington and Beijing broke down, and both sides ratcheted up tensions by slapping more penalties on billions of dollars worth of American and Chinese products.
The renewed trade dispute could hurt Apple, according to Fitch Ratings analysts.
“Apple could be another victim of the US-China trade war and its market-share loss may accelerate in the Chinese market,” they said.
US President Donald Trump last week called Huawei “very dangerous,” but then said he could see the company being included in a broader trade deal with China.
Ren told Bloomberg that using his company as a bargaining chip is “a big joke.”‘
“How are we related to China-US trade?” he said.

India’s aviation revolution and what does this mean for travelers?

Child abuse videos are still being shared on WhatsApp: report