Punjab Safe City Authority (PSCA) in collaboration with the Punjab Police introduces the E-Challan system. The extent of working efficiency of this system has already been tested through the trial run in Lahore. The system will now be operational officially in the entire city from September 24, 2018.

Any violation including over-speeding, wrong u-turns, breaking the signals and ignoring traffic signs would be monitored by the authorities with the help of CCTV cameras installed throughout the city. Upon detection of violation of rules, an e-ticket fine will be generated by the system which later on will be sent to the violator via courier service. What would be the authentication of the e-ticket being sent to the right person for the right violation? To eliminate any mistake during the process of sending e-ticket, the picture of the number plate of the vehicle under violation will also be attached with the challan. Moreover, the photo of that particular incident of violation of traffic rules will be sent along with the e-ticket challan to the violator. This will be helpful in determining the place of incident and confirmation of the violation to the person being charged. 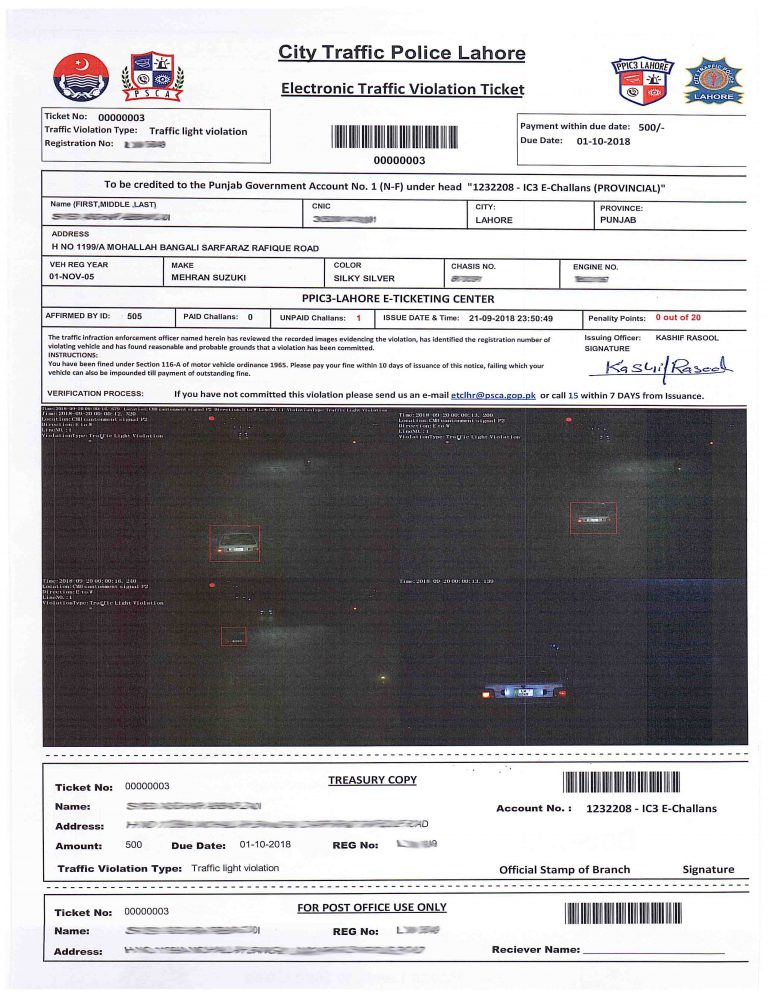 E-Challan system is made in a way that it stores all the previous record of the violators with the date and place of incident. Any vehicle of a person that is detected violating the rules over and over again will be confiscated by the Punjab Police. The vehicle will be released upon payment of all previous e-challans issued. The “Provincial Motor Vehicle Ordinance 1965” allows the vehicle to be confiscated upon irresponsible behavior while driving. Therefore, the violator will not be able to challenge the decision once all the due payment is paid. What if somebody else is driving your vehicle and violates the traffic rules? Who will be charged for this particular violation? The answer to this question is that the vehicle owner will be charged on rules violation by anybody driving their vehicle. The e-challan will be sent at the address of the vehicle’s owner, the one considered responsible for the incident. Therefore, all the owner of vehicles must be aware of this fact from now onwards. The Police emergency helpline number 15 will be available for any inquiry related to the system.

This is a very positive step by the government in regulation and implementation of traffic rules in the city. Violators of traffic rules who have previously escaped from the police wardens will be brought under the rule by this electronic challan system. Any person trying to violate traffic rules will have to think twice before he/she makes a move. It will also create more sense of traffic rules among the people of Lahore where traffic has increased significantly over the past few years. The system promises to bring down the number of daily road accidents due to the violation of rules. The system is particularly a positive move regarding the safety of everyone on the road. Let’s hope the system works with positive results and makes its way in other cities of Pakistan soon. The residents of Lahore need to drive carefully from 24th September onwards.

What do you think of this newly implemented e-challan system? Let us know in the comments section below.

POWER OF SOCIAL MEDIA: Condolences pour in from across the World...

17 die and several of the injured critical as small plane...

Fawad Chaudhry as deputy PM of Pakistan, what you say?

Android users, Google has removed these 15 apps; delete them from...