On Monday, the southern Pakistani city of Nawabshah likely set a world record for the hottest ever observed temperature in April, topping out at a blistering 122.4 degrees Fahrenheit.

What’s more, the city of 1.1 million people has regularly approached those temperatures since mid-April. Accuweather data shows Nawabshah has exceeded a 113-degree high every day since April 23.

The overwhelming demand for air conditioning has taxed Pakistan’s electric grid, causing rolling blackouts across most of the country, per Pakistan Today.

According to Dawn, Pakistan’s largest English daily newspaper, “dozens” of heatstroke victims have required treatment at People’s Medical University Hospital as a result of the soaring temperatures. Two 16-year-olds drowned Monday after seeking relief from the heat in an irrigation canal and getting carried away in the current.

French meteorologist Etienne Kapikian first flagged Monday’s extreme on Twitter, noting it broke all prior records for both Pakistan and the Asian continent as a whole: 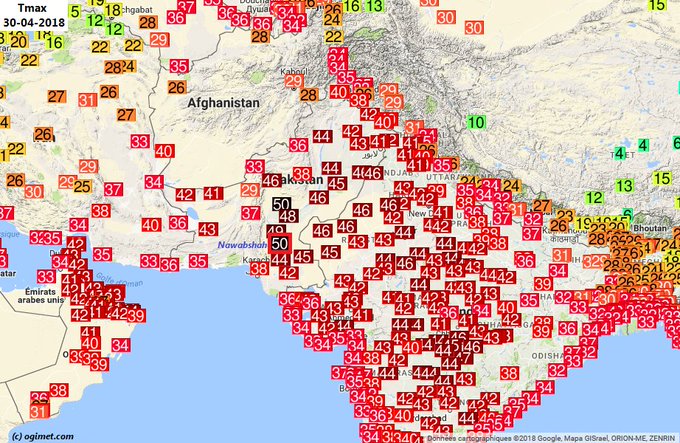 As for whether or not it can be verified as a world record, a spokesman for the World Meteorological Organization told the Washington Post it doesn’t officially keep track of monthly extremes. But weather extremes expert Christopher Burt says it’s likely the hottest record ever set on earth, an assessment the U.N. agency said it has no reason to doubt.

For the sake of comparison, Nawabshah’s April high of 122.4 degrees is slightly hotter than the hottest Phoenix, Arizona, has ever been ― a 122-degree record it set in the summer of 1990. That’s so hot it renders planes physically unable to fly.

Meteorologists blame the region’s extreme temperatures on a high-pressure system known as a “heat dome” that’s covering the Indian Ocean. Per NOAA, a heat dome occurs when hot air is trapped underneath a high-pressure system that acts as a lid and forces the hot air back down toward the Earth’s surface, where it becomes even warmer.

Pakistan faces a greater threat from climate change than it does from terrorism, a 2016 Foreign Policy study found. The frequency of catastrophic floods and severe droughts has increased greatly since 2011, and its main economic city, Karachi, is especially vulnerable.

In June 2015, a five day heatwave in Karachi killed more than 1,200 people in an event Dawn described as “an unending queue of corpses.” Forty-thousand others also suffered from heatstroke and heat exhaustion in the event.

This article originally appeared on HuffPost.

Imran Khan is asking for resignation from Information and Cultural Minister...

Model gets engaged on the ‘Ramp’ during Bridal Fashion Week

It’s World Emoji Day! Do You Know Where Your Favorite Emojis...